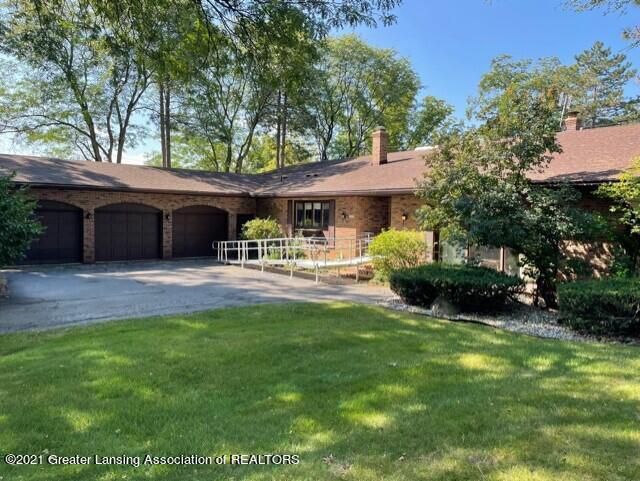 This property is no longer available to rent or to buy. This description is from November 24, 2021
East Lansing, Skyline Heights subdivision. Unique offering with an INDOOR POOL! 3,964 sq. ft. three-bedroom ranch with IN-LAW quarters or 4th bedroom! 3 1/2 baths. This estate home is ready to be personalized including a $15K buyer allowance towards windows or decor. Spacious foyer entry, sunken living room, and raised formal dining room. Large kitchen with a snack bar, center island, pantry, loads of cabinets, and loads of countertops, all opening to the beamed ceiling family room with pretty park like views! Access to the heated inground pool room, sauna, changing room, plus 1st floor laundry. Over-sized primary suite offering double closets and a full bath. 2 additional bedrooms and a full bath, plus in-law quarters with a complete kitchen, full bath, living area, and pool access. 3-car garage. The lower level has a game area, sitting space with a wood stove & bar, plus loads of storage. Close to highway access, eateries, shopping, and Donley Elementary School. Make this home your own!

For homes in 48823
*Based on the
Trulia Estimate

These are the assigned schools for 6055 Dawn Ave.
GreatSchools ratings are based on test scores and additional metrics when available.
Check with the applicable school district prior to making a decision based on these schools. Learn more.

What Locals Say about East Lansing

Do legal protections exist for the LGBT community in East Lansing?

IDX information is provided exclusively for Consumers' personal, non-commercial use, that it may not be used for any purpose other than to identify prospective properties Consumers may be interested in purchasing. Data is deemed reliable but is not guaranteed accurate by the MLS. Copyright © 2021 Greater Lansing Association of REALTORS®

Off Market Homes Near 6055 Dawn Ave